Taking The Long Way ‘Round: A Reading with William Lusk Coppage

Taking The Long Way ‘Round: A Reading with William Lusk Coppage

I recently had the opportunity to read at the 2010 Southern Writers/ Southern Writing Conference on the campus of The University of Mississippi. As pleased as I was for the opportunity, I was even more excited to learn that my friend and classmate William Lusk Coppage would also be reading, and we would be on the same panel together. Because we are in school together and live in the same town, this news meant one thing—road trip. Willie is from Mississippi and definitely knows his way around the state, and so we turned a half-hour reading into a four day adventure.

Willie actually left for Mississippi a day earlier than I could, so I met him at Ole Miss on the day of the reading. I had read with Willie several times before, and had seen him read and teach, but this reading felt different to me. I guess it was because we were outside of our own college. There was also a sense that we were on his home turf—this was Mississippi after all.
I had already read or workshopped many of the poems he read, but hearing a person read their own work, with all the intended emphasis and cadence, really gives the poems life. One of Willie’s strengths is how he adds to the poetry by reading it. I have come to appreciate many of his poems more by hearing him read them. I understand his choices of diction or rhythm better, and what I really noticed in hearing a group of poems together, is that each piece compliments the other in a series, which is basis of a good poetry collection.

Once our reading was over we had several days to explore and sightsee. We stayed in Oxford for another night and did some stomping around Faulkner’s old stomping grounds. I underestimated how thick this area is with writing history. After shopping for books for a while we went to dinner and drank whiskey with some of the best new writers in the south. It was one of those rare times when I felt like a true writer.

We left Oxford the next day and headed for Willie’s hometown of Greenville, MS. Driving through rural Mississippi, I began to get a sense of where Willie’s poems were coming from. There is an endless supply of source material for poems here, from the fields, to the people, to the sheer way of life that has existed for centuries. It reminded me very much of my own Louisiana, and helped to inspire me just by simple association. We stopped at the Crossroads for a bit of the Delta blues (turns out it’s just a couple of large highways now). We found a random sunflower field (not all that common in the south). We found a roadside Ronald McDonald at a country store. I got to see a large cross section of a region that has inspired writers for generations.
I heard that the Delta has more writers per capita than any other area of the country. And I found out that they’ve produced more than writers and blues musicians. Jim Henson was born in Leland, MS, not far from Greenville, and Will and Missy make it a point to take visitors to the Jim Henson Museum whenever they can. I got to take a picture with Kermit the Frog, perhaps one of the Delta’s most famous sons.

We spent our last night at the Coppage home, on an oxbow lake off the Mississippi River. It felt good to be on the water and fish and swim like I did as a kid. I don’t have many opportunities for that kind of fun anymore, between work and school, and living away from my family and the waters of my boyhood home.
I know I got more from this trip by going with Willie and Missy than I would have if I went alone. I would have probably spent one night in a Ramada Inn and come back home. But I had some good times and a hell of an inspiring experience instead, one that goes beyond the actual work of being a writer. With any luck some poems may come from this, and hopefully I’ll get a chance to go back one day.

J. Bruce Fuller is the author of 28 Blackbirds at the End of the World (Bandersnatch, 2010) and blogs at http://jbrucefuller.blogspot.com. Follow him on Twitter - @JBruceFuller. 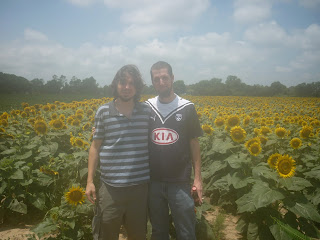 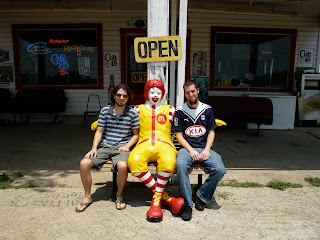